In the past, it may not have mattered if people lost their teeth, especially those in the front. Never the less, attempts were made in the past to replace missing teeth, and archeological evidence suggests that indeed people in antiquity did wear “artificial” teeth, and even before dentistry became a profession in the real sense of it, many acted on their behalf, even going as far as replacing missing teeth. In today’s’ world where aesthetics matters, a slight fracture of a tooth is a huge flaw in the mouth.

There are numerous reasons why a tooth could be lost or removed either by the dentist or as a case of an accident. Once a tooth has been deemed fit to go by a dentist, or taken off following trauma or the likes, it becomes a necessity to people to ensure that they get it replaced, if not for any other reason, aesthetics most importantly.

The methods for tooth replacement varies, but these methods can be grouped into the Removable and the Fixed (Non-Removable) Replacements. The removable alternatives are the dentures that are quite popular, and even if you also do not wear one, you will know someone who is wearing one. For Fixed (Non-Removable) Replacements there are two main types: the Dental Bridge and the Dental Implants.

1. Dental Implant: Dental implants have become modern dentistry’s best option for replacing fallen teeth. With dental implants, you have a highly successful, long-lasting, and natural-looking alternative that becomes part of the jawbone and helps maintain its health. The principal reason is that the titanium of which dental implants are made has the unique ability to fuse or “Osseo-integrate” with living bone. There are now more than 40 different types of dental implants, and millions of people worldwide have a better quality of life because of them. Dental implant surgery is usually carried out using local anesthesia, and this operation is a relatively comfortable procedure.

Dental Implants possess numerous advantages over other options of tooth replacement; because a dental implant feels and looks like a regular tooth, it can do wonders for a patient’s self-esteem. Beyond the aesthetics, a dental implant also makes it easier to eat and speak. Also, an implant doesn’t come loose like a denture. 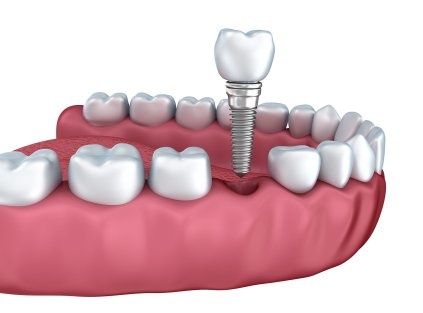 2. Tooth-supported fixed bridge: A common tooth replacement option, the process of adding this type of bridge intentionally damages healthy teeth. Specifically, the procedure involves grinding away healthy, adjacent teeth, then adding a bridge across those teeth to support the crown. 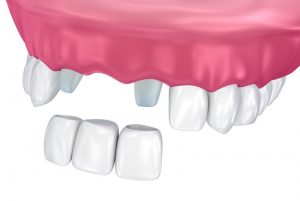 4. Complete denture: Often viewed as the low-cost alternative. Perhaps, Complete dentures can be awkward (for instance, they can click in the mouth when one speaks, eats, laughs or coughs), be uncomfortable, and also limit the ability of the individual to taste food fully.

Looking For The Cure To Dental Phobia?

In today’s world, whitening of teeth is a prevailing restorative procedure that is non-invasive and produces beautiful very attractive white teeth. When we begin to advance in age, it is logical for our teeth to darken and it is caused when the mineral structures in...
Read More

Getting Treatment for Your Smile

Smile treatment is a treatment for shorter teeth which may include reshaping and lengthening the two front central teeth with composite bonding or porcelain veneers. If you have a gummy smile, your cosmetic dentist may provide treatment to modify the gum line and...
Read More

Looking For Invisible Braces To Straighten Your Teeth?

In the past years, many orthodontists have seen a significant increase in the population of adults opting for orthodontic treatment. Much of these developments is related to an increased awareness and importance placed on cosmetics and dental health. However, clear or...
Read More

Tooth whitening also known as tooth bleaching when utilizing bleach is either the restoration of a natural tooth shade or whitening beyond the natural shade. Now there are various ways an individual can go about this and whiten his teeth to feel better about himself...
Read More

What Exactly Is A Root Canal Treatment

Root canal treatment is a dental procedure to replace a damaged tooth or infected pulp with a filling. Root canal therapy is performed when the pulp which is composed of nerves and blood vessels in the tooth becomes infected or damaged. It is one of the most common...
Read More

Recently, people have considered the value of working with a dentist to manage their sleep-breathing problems, even though dental sleep medicine has been around for over three decades. It was first pursued in conjunction with other treatments (namely continuous...
Read More

Getting Fluoride Treatment? Here’s What You Need To Know.

Fluoride is a natural mineral that can be found in many kinds of food and also in water. It is an important mineral that keeps tooth decay at bay. Fluoride, also the calcium in our teeth is lost through a process known as demineralisation where the enamel layer of the...
Read More

What are Dental Implants? Am I A Suitable Candidate?

Despite improvements in dental care, millions of people still suffer tooth loss either due to tooth decay, periodontal disease, or injury/accidents. For many years, the only treatment options available for people with missing teeth were dental bridges and dentures....
Read More

Getting a Tooth Filling At The Dentist

Tooth filling is a treatment to restore the function, integrity, and morphology of missing tooth structure which results from caries or external trauma as well as to the replacement of such structure supported by dental implants. Tooth fillings are most commonly used...
Read More